“An Aberdeen-based printing and embroidery company, which was among the winners at this year’s Scotland Prestige Awards, has moved to a purpose-built studio as part of its ongoing expansion.

Led by Founder Ola Adeyemi, Ripples Custom Designs & Prints has moved to The Studio in Kintore as a result of steady growth with client acquisitions, meaning the team require more space to meet growing demand.

It recently secured an industry award win, being crowned Embroidery Service of the Year – Scotland (Aberdeen), at the Scotland Prestige Awards.

Launched in 2019, the Scotland Prestige Awards recognises businesses that are extremely successful and hard working on a local level.

Commenting on the award win,  Ola said: “This award means so much to me and the Ripples team as it validates our hard work. I have been running Ripples Prints for over 8 years now, and to be recognised for our services as we enter our ninth year, shows we are not stopping anytime soon.

The company has grown from my home and we have recently moved to a fully operational premises in Kintore which will enable further expansion of the business.”

The company’s premises at Centurion Court have suited them well for the past 3 years, but their new home in Kintore will enable them to offer more support to clients within and beyond the region.

The purpose-built studio was once a broadcast radio station, hosting the North East Community Radio, which is why Ola decided to keep ‘The Studio’ as part of the address, alongside traditional features of the building, such as the stone walls found inside.

Discussing the plans for The Studio, Gordon Lee, owner of Craigdon Construction said: “The vision was to combine a space that would act as both an agency and a workshop while including traditional and modern features for high-technology machinery and printers.”

He added: “I would check in with Ola every so often to hear her thoughts on our progress, but we worked well together and she trusted me to just get on with it. She definitely had big ideas and it was a pleasure to provide more capacity for Ola and her team to work with a large variety of clients.” 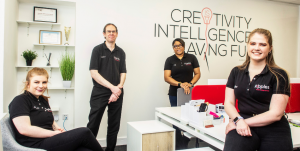 “An Aberdeen-based printing and embroidery company, which was among the winners at this year’s Scotland Prestige Awards, has moved to a purpose-built studio as part 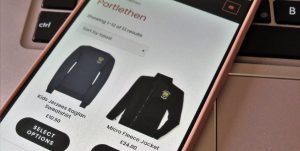 Ripples For Schools – Everything You Need to Know

We have been working hard behind-the-scenes to set up our latest service, Ripples For Schools . You may have seen our posts about it lately, asking parents